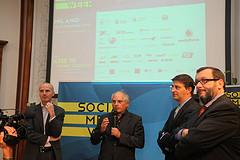 Fragmentation and low management level – is major constraints of interaction between business and NGOs. Of course, there are various online projects, social networks, which allow to combine in virtual space business, nonprofit organizations and government. The need for such innovations has today become apparent to society itself. Clear evidence of this is the best attempts of the public, public-spirited citizens to unite; For example, a social network ".ru" where together NGOs, social activists, volunteers, businesses and government. They have already realized the importance of solving problems together.

It is hoped that the virtual union goes into action. But is the figure of 500 thousand organizations in Russia with a population of about 140 million people? Sufficiency, of course, depends not only on quantity, but for the size of the country with the largest geography, we can confidently say that this amount is not enough. In the event that Russia would once in 5 less at the same density of population, for sure, social activists would feel if his shoulder and colleagues were more effective. Who needs it? The issue is still the same, who needs to develop a non-profit sector? The answer is obvious: both the authorities and business. This development will provide a foundation of trust, increase efficiency, including, and economy. On the one hand it may seem that this is absurd – to develop civil society institutions for economic growth. But this proposition is confirmed by international experience. Democratic development of society, responsible, actively asserting their rights – the foundation of stability for the state and business.